JCH is a reflection on the production of habitat, morphology and construction processes in the Buenos Aires suburbs. It is possible to produce Architecture outside the clusters of cultural production. The constructive fact is to consider as a whole, from the analysis of the environment to the process of moving the neighbors. Traditional constructive, economic and legal resources were used from an innovative perspective to result in a building that is friendly to citizen life. Each owner directly fulfills the figure of the developer, this allows a direct contact between architects and users. If the production systems are placed at the service of Architecture, it is possible to reduce costs and improve building quality.
The constructive capacities and technologies that are found in the suburbs tend to leak towards the central city, accentuating more and more the differences between center and periphery. It was important, in this proposal, to take advantage of them locally. This accompanies the processes of creating new centralities that help to overcome the profile of “dormitory town”.
The work finds its place between the worlds of architectural theory and the construction industry, on the border between the countryside and the city, between art and commerce. From these intertwinings an interstitial architecture emerges.

Morphologically, the building intends to investigate the role of a structural envelope and the interstitial spaces that it generates between the exterior and the interior. It operates in these new spaces considering the climatic conditions, the social and economic environment and the reality of the contemporary construction industry in our region. Through various variations in the enveloping, meeting points between neighbors and extensions of the housing units are formed. In the thickness of the limit between the intimate world and the public world, a place opens up for the “neighborhood”. The building is thought of as a large house with different moments of privacy, intimacy, and get-together.
Materiality investigates the technological and technical possibilities at its disposal, always seeking to push them to the limit. The plastic possibilities of concrete, the versatility of phenolic plywood and the possibilities of digital manufacturing have been studied.

The project is influenced by traditional elements of architecture such as loggias or cloisters, with a contemporary look that does not seek to be oblivious to history. The plant is organized in L, forming a half patio, the circulation loggias offer gathering and visual places. By twisting the circulations and assembling them in a simple corridor, it is possible to see and be seen during the architectural tour, in a game of visuals that materializes the void. The half patio and the height allow an introspective look at the same time as long visuals. The shelter offered by the patio and the loggias are combined with views of the groves, the sunset and the sunrise offered by the peri-urban environment.
The simplicity and strength of the concrete allow a formal game that surrounds the entire building as a general veil, which seeks to make the idea of levels -with openings that unify the different floors- disappear. This second skin or peel responds to both the city and the interior of the building, it is an intermediate element with different functions for each one. Towards the neighborhood, the building offers itself as a screen where different works of artists are exhibited.

In low-density areas, the street is not fully consolidated as the public space par excellence, as is the case in the dense city. This type of co-owned buildings seek to respond by offering communal spaces. Faced with a transformation of the urban fabric with the appearance of buildings in height, the neighborhood is offered a new point of reference in an area that is redefining itself and renewing its identity. Although over time it will remain between party walls, the project must function in isolation for a prolonged period and therefore must be able to respond both to the current urban fabric of low-rise houses with an independent project and to be incorporated into the new urban fabric that will slowly emerge.

Living in a building that belongs to many is very close to the idea of community, spaces and artifacts are shared. The design process was guided by an idea of the building with a socializing role. Intrinsic characteristic of collective housing buildings but rarely emphasized in contemporary local architectural production, guided mainly by economic forces.
The forms and programs designed accompany the gathering and sharing. 2m wide semi-covered circulations that are more than passage spaces, become new spaces for common use and extensions of the units. On the top floor there is a kitchen for common use that is utilized by the neighbors on special occasions when the private ones are too small. The location of the grill, stove, wet area and cellar spaces invite the neighbors to use them, and are utilized daily. The building is thought of as a large house proposing different levels of coexistence: the external (global or citizen), the collective and the intimate (functional unit). The envelope works as an articulator of these different “moments”.

Concrete exoskeleton, unit aesthetics
Concrete allowed the materialization of this structure that functions as a “box in a box” where two structural layers are located one after the other, resulting in these new interstitial spaces. The building does not invent new structural elements but places them in an innovative way.
Water and Concrete, another love story
The relationship between concrete and water was investigated in what ceases to be a pool and becomes a “wet space”. It was diagrammed considering an itinerary and with the idea of marching between different spaces. As a result, a shape was obtained, which resembles a cave due to its sounds and colors.
Concrete and wood, contraposition
The loggias are framed between a concrete screen and another one made of mechanized wood, one rigid side and one organic, the warmth of the wood contrasts with the strength of the concrete. The durability of the concrete protects the wood from inclement weather and a dialogue is achieved between the two.
Stone, silence and wood
In the basement, a wine cellar was the ideal excuse to build a space surrounded by mechanized wood with a white split stone floor and a black ceiling. Silence and the smell of wood are the two main characters of this place.
Digital Manufacturing in the suburbs
Digital manufacturing techniques are frequently used in various industries and in industrial construction, but they are of almost zero use in civil construction. One of the biggest barriers between these two worlds is language, since production workshops and architecture studios are not used to working together. We have developed various production and documentation processes for digital manufacturing and have been able to greatly reduce costs for use in new areas. The architecture slowly incorporates elements from other industries.
For the building, 2mm steel sheets and 12 and 19mm phenolic multi-laminate pine plates were digitally machined with motifs specially designed for the uses and effects sought. Bars, gates, blinds and ceilings with lighting were assembled. These new production techniques can serve as a reference for other architects who are following a similar path.

A reinforced concrete envelope morphologically organizes the entire system; between the private spaces of intimacy and the surrounding structure, new places are configured that respond to an intermediate level between the intimate and the public.
Peter Eisenman proposes that according to the concept of “little signature” (“firmita”) the structural elements not only fulfill the role of supporting the building but must also give the “impression” that the building is supported. The columns and partitions are structured in such a way that they are no longer understood as mere structural elements and play a textual role. The building begins to be read as a self-sustaining whole, a single element that opens and closes to form different situations, the individuality of each pillar is lost and the idea of horizontal levels one above the other is blurred to give rise to the idea of an inhabited whole.

The L-shaped plant with the circulation system of a courtyard is modified to respect the leafy tree that for a century has been the star of the northeast corner where the building is located. A new balance is formed in the conversation of the organic with the rigidity of the concrete. On a pedestrian scale, a small access patio is generated, a place that stands between the street and the interior of the building.
Rigid and organic
In a similar way, a contrast is generated between the concrete and the works of the bars and mechanized blinds. The versatility of digital fabrication allowed us to work with a local artist who produced drawings studying the use of italics as a texture. Work is done at the level of what Farshid Moussavi calls “Affection”. Without being clear about what the “effects” of these elements will be, they are incorporated into the project as more than just ornaments. Wood and openwork steel as well as the wood inlays in the concrete which purpose is to configure vertical enclosures, also seek to generate new sensations in the receiver.

All the project work and the construction makes sense when the building is occupied. It is at this moment when the drawings stop being formal abstractions to become places, for gatherings and sharing. When the interstitial spaces cease to be a statement to become the scene of the life of a new neighborhood that is generated. The arrangement of the circulation loggias around a patio and its “protected” character that neither shows nor hides at all, encourages the crossover among the inhabitants. The private sectors have an intermediate space that offers a particular relationship with the street and with the sky.
The building is offered as a possibility of generating a collective habitat and as a way of manufacturing architecture in unusual places, on the outskirts.
Background
In Moreno the architect Claudio Caveri with his community and his chapels proposed a very evocative architecture. Our ideas of an architecture with a socializing role and with great expressiveness have undoubtedly been influenced by his work and thought. The architecture proposed by the Lacaton Basal studio with intermediate and enveloping spaces in a low-cost architecture is one of our most important references.
Research
The investigation was framed by two very different perspectives, one in the material world, the concrete of the constructive fact, the materials, techniques and technologies, and the other in the abstract world, the legal and economic. It is perhaps in this state of mind that what ends up being the icon of the building was outlined. Thinking from that small crack left by the two worlds, an “interstitial” architecture emerged.

Material
When it was decided to face the production of this building, the technological and technical resources available in the suburbs were studied, having found a highly qualified workforce for the production of concrete with wooden formwork.
In this building, an attempt was made to exploit to the maximum the technical possibilities available, placing concrete as the great tectonic and formal protagonist. Likewise, we found that architectural projects were not exploiting the possibilities of the digital manufacturing industry and we could find a great tool for the materialization of innovative projects there.

The management objective of reinterpreting economic models to put them at the service of Architecture and quality of life and not the other way around as usual. In this case, the aim was to make the figure of the real estate developer disappear, making users and small investors their own developers. It is a model similar to the one carried out in France under the name of “auto promotion”. In this way, it was possible for many users to have access to their first house of their own at a lower cost. 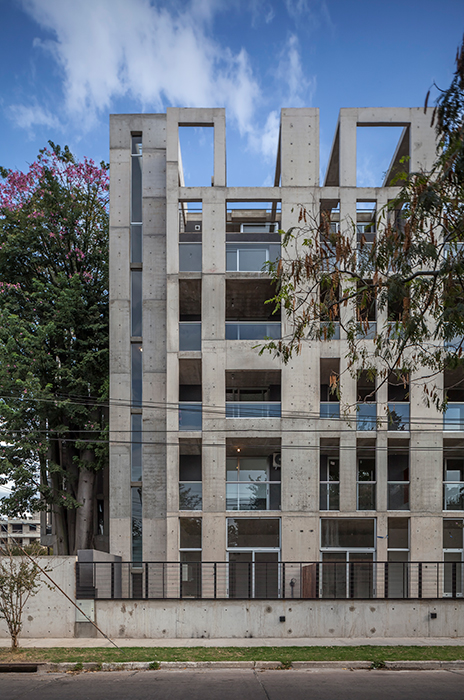 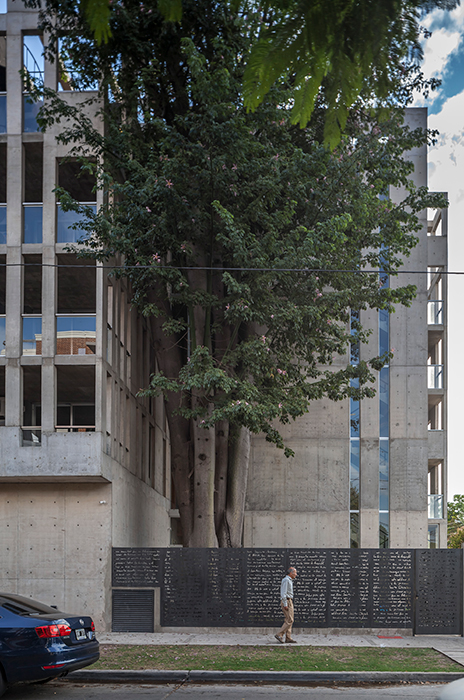 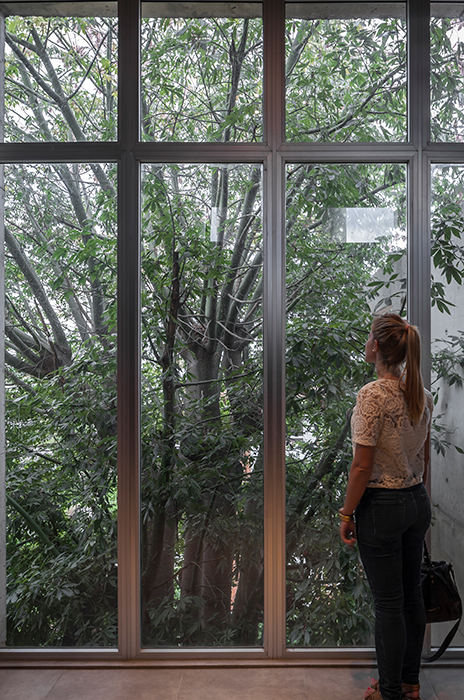 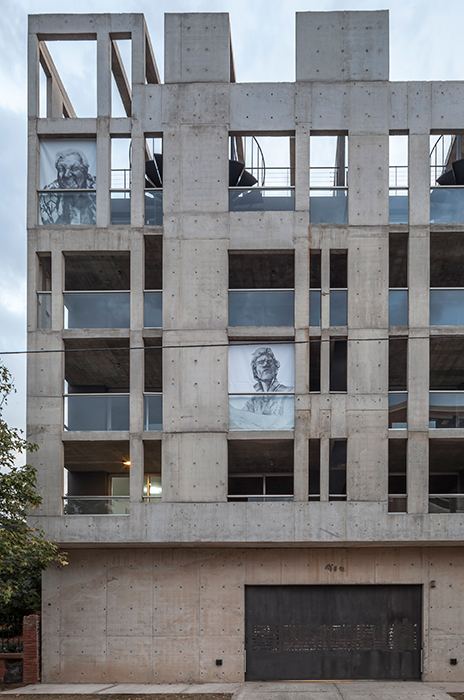 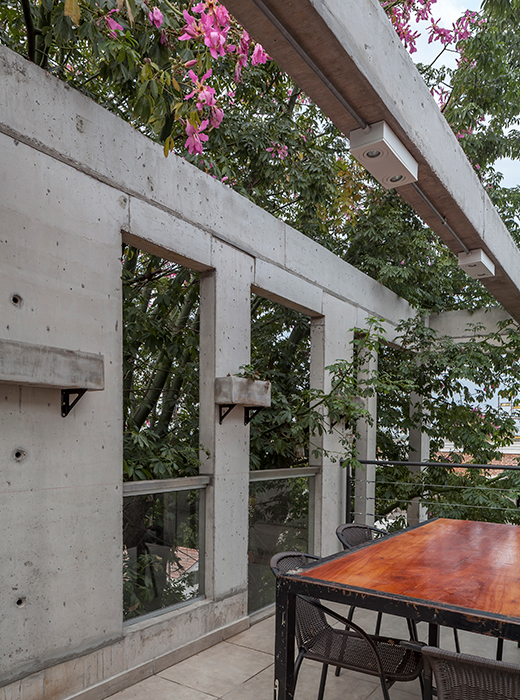 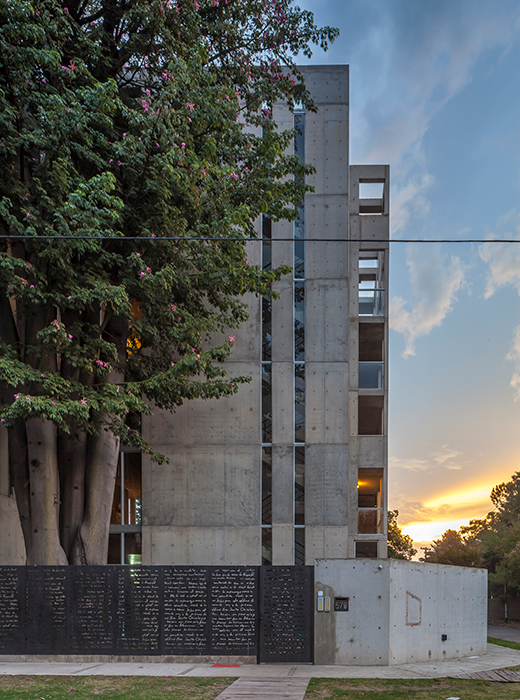 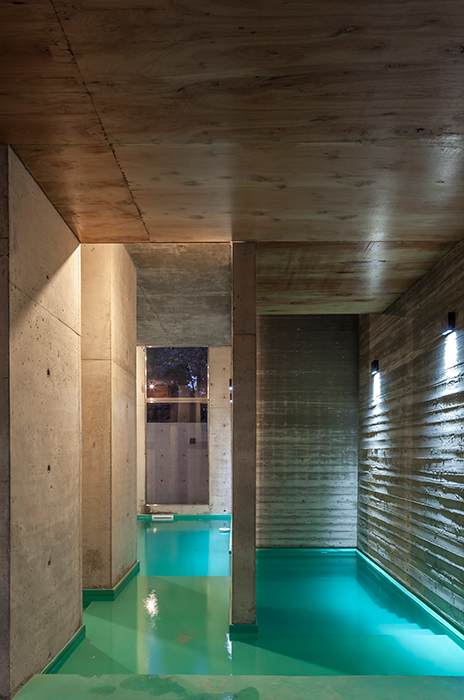 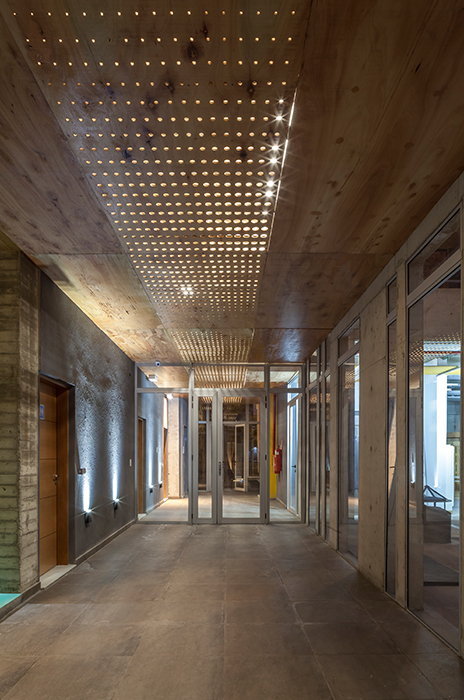 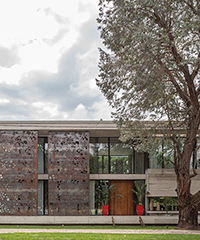 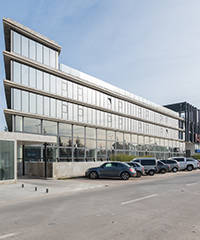